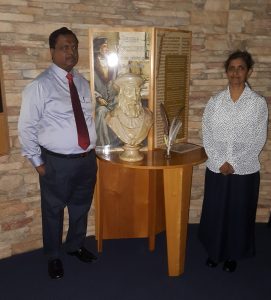 The vision and mission of the founder of Wycliffe Bible Translators, Mr. William Cameron Townsend, has always been an inspiration to me. So on this World Bible Translation Day 2016, Raaji and I decided to visit their headquarters in Orlando, Florida. At the front desk, I introduced myself as a Bible translator and presented them with copies of the New Testament in the four Indian tribal languages we had translated. He replied to me that their policy did not allow them to accept or endorse Bible Translations by others. I stated that I was there neither for their endorsement nor acceptance but to inform them about these translations, so that these four languages could be removed from their much publicized list of languages that were in need of a translation of the Bible and their resources could be used for other languages in need. I requested them to place these translations in their Asian showcase of Bible translations. Once again I was informed that their policy was to display only the translations made by them. It was evident that their policy of not promoting or letting the world know about other translations made on earth arose from their fear of losing their prominence and benefits.

I had similar experiences earlier from the Bible Society of India, Bible translation organizations and even Churches involved in making translations of the Word.  The common factor is that all of them lament a lot about the thousands of languages in which at least a portion of the Bible is yet to be translated. But they fail to appreciate or accommodate a new translation made by lesser known people with no assets or affluences in some remote corner on earth, because they do not belong to any such organization. They fail to realize that a translation can be made only when a spiritual battle is won, and only spirit-filled men of God can bring forth a translation of the Word of God.

That night, as I poured out my heart before the Lord about this dampening experience, He led me to a new vision: to start a museum to showcase all the Bibles on earth in all the languages translated by any organization, church or individual with an up-to-date record of such translations. It would also show the progress mankind had made ever since God had written the Word with His own fingers and handed it over to Moses for His people. Thus the “The Museum of the Word” was born! It is an uphill task, but God has used such negative situations in the past, guiding me to set new goals for Him, complete them, and crowning them with His blessings.

About two decades ago, I was broken hearted when the Bible Society of India in Bangalore refused even to look at the errors in their outdated Malayalam Bible translation that I had painstakingly documented. They turned me away, asking me what theological credentials I had to propose such corrections. I wept that night at their insults. They did not even bother to look at the corrections or their validity – corrections I had researched and compiled over fourteen years. That night the Lord came to me in all His glory. “Fear not I am with you. I want you to complete and publish the Bible all by yourself and yourself only. Now I am anointing you with the gift to translate my Word,” the Lord said.  The very next day, I started the Millennium Modern Malayalam Bible Project or the 3MBP. The Vishudha Sathya Vedapusthakam, my translation of the Bible in Malayalam, was published on the 22nd of December, 2000. Satan never gave up. I was deported with my family from the country I had worked for twenty-four years because I translated the Bible. It was masterminded by my own Christian brethren. They proclaimed that I was finished forever, as was my Bible translation. Again I heard the sweet voice of the Lord, “I will not let you down. I am with you.”

Yes,  He is ever with me and has enabled me to pioneer translations in 6 more languages!

Three years ago, the leaders of the fasting prayer fellowship I had toiled to build up over three and half decades, conspired together and expelled me from the fellowship with false accusations and injurious insults… It broke my heart. It seemed my efforts of a lifetime for the Lord were shattered by a few people who feared their wickedness would be exposed. Again the Lord assured me nothing was lost and that He would lift me up and lead me in His glorious path. The Lord reminded me of Bill Bright and Merlyn Carothers who faced similar solitudes in their spiritual journey. The Lord helped me to start the broadcast of Word to World Television Channel 165 days ago and the Word to World Centre to house it 24 days ago. The Lord has used every adversity of mine to accomplish mighty feats for Him. And now once again, from the dampening experiences on this World Bible Translation Day arises a new project for His glory- THE MUSEUM OF THE WORD.