Hugs, flowers, greeting cards, gifts, some good food and once again Father’s day is over. My thoughts about father’s day go much beyond these social gestures.

My father, late Mr. M.V. Mathews, whom I call Pappa has the paramount position in my heart among mortal humans on this father’s day. It is Pappa, whose life and principles drew me to God. His family life was exemplary – I say because of his care and love for my mom. They were unanimous in everything, doing everything in one accord.

He was very strict, possibly even too strict with me in my childhood with no appreciation or exhibition of love, which my younger siblings got. 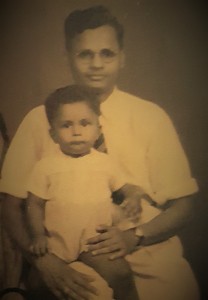 Being his first born he could not tolerate any pranks, nor put up with my mischief and strong willed nature. He tried to discipline me with the cane but failed as I refused to be tamed. This went on till the age of 12 and his attitude began to change as there came five others after me. His confidence in me grew and from my 16th year he freely allowed me to handle the finances. It was the tune of thousands those days which today may mean lakhs. He has never scolded or even uttered a word when I ran into losses because of my immaturity. He has never asked me whether I drank or smoked and never asked me for the accounts of his money taken by me. He tried his utmost to give us, all what we children asked for. He sold a piece of his property to pay the capitation fee for my admission to the B. Pharm course in spite of the advices of dear and loved ones who tried to stop him. However, I failed repeatedly in the first year B. Pharm course and went to Pappa with the results of my fourth failure. I expected a shout from him and had prepared myself to apply for a job in the Indian Navy. To my surprise Pappa told me, “I want you to complete the B. Pharm degree at any cost even if I have to sell all my property.” It shattered me because he never blamed me, though he knew that one of the main reasons for my repeated failure was that I was involved in student politics going to the extent of even leading a strike. His words gave me a new sense of hope and confidence. I returned and never failed again, graduating with a first class! I was chosen for a highly paid job even before graduation among 15,000 applicants from all over India. At the end of my final interview conducted by the top brass of the company I put forward my hand to shake hands with the members of the interview board. Everybody except the top man shook hands but he refused. I felt humiliated. When I returned home, all at home were buoyant that I was selected and stood first in the interview. However I told my father that I could not work with a person who had no basic courtesy to shake hands with someone who stretched forth his hand. There were a lot of debts at home and this high paying job would have eased the situation. I thought he would compel me to take up the job due to his financial strains, but he strongly said, “Don’t take it up if you are not happy.” I didn’t take up that job and furthermore, decided never to look out for a job in India. I wanted to go abroad and that wait cost me another 15 jobless months in India. Pappa never ever blamed me and was still supporting me when debts were on the increase- that was Pappa!

His spiritual life paved the way for my own journey. He was the pioneer in building two churches one in Kuala Lampur, Malaysia and another in his native place Mannar Kerala, India. His prayer life was a great example for us, as was his honesty and determination to stand for truth. Indeed his life, love, and confidence showered in me, is the foundation of all what I am today.

The shining stars in the horizon of my reminiscences is that God blessed me with three lovely, loving, God-fearing children and their spouses who share my principles and join me in the building of the Kingdom of God. Their zeal and passion for God till this moment is something I treasure on this father’s day.

Praises a million and glory to my Heavenly Father, for His showers of blessings, for granting me a father and making me a father for building the Kingdom of God on earth.