It was at the Annual three day fasting prayer in New York, at the end of December 2012, that the Lord commanded me to build a church in the Ecumenical Convention Centre at Bangalore. This seemed a difficult task as this had to be built in an existing structure full of beams and huge pillars. Traditionally for most apostolic churches, the Mass can be celebrated in any premises – all that is needed is a table and a couple of candles. In fact, this is how small groups of believers celebrate Mass in places with no churches and in remote areas where there are little or no Christians. However such a makeshift church was not what the Lord wanted me to build. I have always desired to offer my heavenly father the best and most beautiful in whatever I do. The Lord promised me that His hand which was upon Ezra would be upon me too, to guide and strengthen me to accomplish this mighty task for Him. It was this blessing of God upon Ezra that enabled him to lead his people from captivity, lay the foundation and eventually build the second temple of Jerusalem.

On reaching Bangalore, I was greeted by utter spiritual darkness at the ground floor of the Ecumenical Convention Center that had to be restructured into the church. In the six years since it had been built, no worship had taken place there, and it had become a den of devils. The task at hand was made even more difficult by the fact that the prayer fellowship occupying the first floor was against a church being built there because their prophetess has prophesied that it was not God’s will to build a church there. Their venerable prophet also uttered the same words and started praying against the building of the church. Little did they realize that these uttering made by them in the name of prayer, was actually strengthening Lucifer himself who was all out to thwart, defeat and destroy me and prevent the construction of the church.

God’s hand was upon me throughout the whole process as He had promised me – revealing to me His plans for the church, just as He had shown His servant David the plans for the temple of Jerusalem, and guided me with the wisdom He had granted Solomon to build the temple of Jerusalem. The construction of the church was completed by the grace and hand of God amidst all these adversities. The Church was consecrated on April 3rd, 2013, by His Grace Joseph Mar Koorilose Valiya Metropolitan amidst the praises and prayers of scores of people who had come for the ceremony, even from abroad. This is the fourth church the Lord had blessed me to construct and dedicate for His glory in the name of His Son Jesus Christ .The grandeur and  uniqueness of the holy place, by far, is rarely seen in any other Churches.

The hand of God had miraculously and victoriously helped me accomplish the task He had entrusted me. Yes! The impossible is made possible when the hand of the Lord is upon you, guiding you and leading you. Praise be to His Holy name. 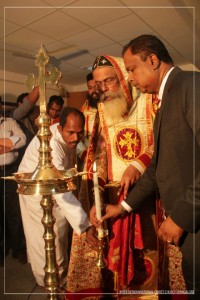 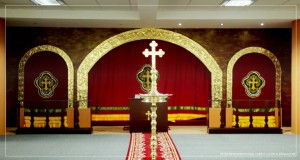 8 thoughts on “The hand of Lord my God was upon me!”