2012 started off with a bang, with the blessings of graces showered by the Almighty God at the Annual 72 Hour Fasting Prayer at New York. The New Year was joyous as the Lord gave us the privilege to celebrate the marriage of my son Ajay with Ansu, solemnized by His Grace Joseph Mor Koorilose. The entire ceremony and reception was indeed blessed by the love and mercy of the Almighty God, the presence of His son Jesus Christ, and the leading and guiding of the Holy Spirit. It was a new experience for the attendees unlike other modern day weddings. Thus, the Lord wiped away our tears, which were shed for the past couple of years on Ajay’s issue, and removed once and for all the ridicule we suffered, even from spiritual spheres. Both my daughters, Viji and Reji, were pregnant. Viji gave birth to a sweet baby girl (Sharon Rose).There again, it was a miracle, as she had a miscarriage earlier and was not conceiving for some time (with a lot of questions hurled at me). We were all anxious about Reji, who continued her pregnancy despite repeated medical advice to abort the child. She believed what God had assured me that He would save the child and that He had chosen the child. Nathan was born with serious medical problems, but the Lord miraculously healed him with a couple of operations. It was an unquestionable medical miracle, with every step documented. His miraculous recovery was posted on You Tube with more than 3000 hits and about 5000 CD’s of Nathan’s testimony were freely distributed in the Middle East and other countries. In October, God blessed Ajay and Ansu with a son Vijay (Mathews Vergis III), granting us three grandchildren in 2012.

As the Lord was leading me with miracle after miracle, Satan was filling the leadership of my ministry with more and more of jealousy. It reached new heights when I became a victim of cruel character assassination by the leadership of my ministry in a three-day fasting prayer in Kuwait. The fasting prayers conducted by the leadership thereafter were similar to the fast conducted by Ahab and Jezebel, where Naboth was falsely accused and stoned to death. I was even branded as a false prophet led by an evil spirit. Though many, whom I brought up in spiritual world, betrayed me, I experienced the stupendous love of my heavenly father more than ever before. He was speaking to me, comforting me and revealing His great plans for me. He told me to remain silent, and He would lift me up and prove to the world that I am led by the Holy Spirit.

In the meantime, I chose to undergo a Bariatric surgery as the Lord instructed. He was with me and I never experienced any pain other than the discomfort of the IV needles and tubes being inserted. It is no exaggeration when I say that Jesus was beside me comforting and strengthening me during and after the surgery. Just a month after the surgery, I left for the Holy Land leading a group of 50 of my brethren, and even led a 24-hour Fasting Prayer in Jerusalem. It was a mighty experience with the Almighty God Himself guiding me, the presence of Jesus, and a heavy anointing of the Holy Spirit on the participants of the fast. The most significant part of the fast was that the Lord in His glory told me He is going to lift me up publicly. I believed it completely, but did not know how the Lord would bring it about. 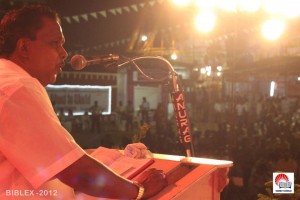 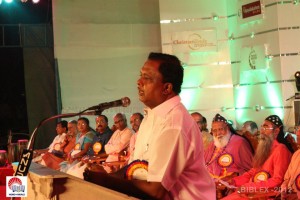 God provided me the opportunity when the organizers of the Christian Expo 2012 invited me to take an active participation in the event by being the main sponsor and to launch Word to World TV at the Christian Expo. They requested me to organize a Bible exhibition, as I had done at the Maramon Convention years ago. I was reluctant, but once again the Lord assured me that He would send people to help me organize the event. Thus, many came for the event from abroad and all of us stayed together at Tiruvalla for the whole week enabling tens of thousands to understand and see the glory of the Word of God. The Biblex 2012 spread in 3000 sq.ft. was the biggest draw of the Christian Expo 2012. To my surprise the organizers arranged for the release of my book on Jealousy in the inaugural function by His Grace Philipose Mar Chrysostom Valia Metropolitan. I saw the Hand of God in it, as it was the Lord who asked me to write a book on jealousy while I had undertaken my 9th 40-day fast in June 2011. He had granted me the grace and Wisdom of Solomon to complete it in His grace, so many who had been cut away by Satan’s sword of jealousy, may be saved.

Above all, God gave me an opportunity to speak at the public meetings of the Christian Expo. Thousands from different churches and denominations, from various parts of Kerala, attended the Gospel meetings every evening, which was followed by a musical show. The Lord used me in a mighty way, when I gave the gospel message on the 4th day. Many surrounded me after the message saying that the Lord comforted them and they were touched by the Holy Spirit. Thus, the Almighty God had proved to the pundits of evil spirit in my fellowship about His abundant anointing on me.

God crowned me with stupendous Gifts and Graces at the Annual 72 hour Fast at the end of 2012, which by far brought me the greatest blessing in my spiritual life for the past 43 years. It was attended by people far and wide through video streaming. Hundreds were anointed and renewed by the outpouring of the Holy Spirit in the fasting. It was the greatest spiritual experience of my spiritual journey in a span of four decades. The Lord blessed me with gifts and graces, which very few have ever attained before. I am really very very thankful to the leadership of my parent ministry, who tried to tarnish my reputation and hurled insults at me publicly. It drew me nearer and nearer to God, and finally made God in His mercy to shower His gifts and graces on this poor ‘worm’.

Yes! I was thrown into the fiery furnace of hatred and malice by the leadership of the ministry which I had built up from scratch with my sweat and tears over four decades. The leadership blinded by jealousy, bitterness and avariciousness wanted to destroy me. This enabled me to cling on to God more and more and brought His unfathomed love to me more than ever before. He commissioned me in the dawn of the New Year for an International End Time Ministry, a far cry from a ministry so far confined to only a few hundreds of people in different countries and now shrinking and sinking because the leadership had been struck by Satan’s sword of JEALOUSY. And at the end of it all, God has chosen this poor worm to be made into a new sharp threshing instrument having teeth to thresh the mountains and make the hills as chaff (Isaiah 41:15) and to march forward in the New Year proclaiming His glory to the world.